HOME > Column > A Summons to Life

In connection with the photography exhibition "European Eyes on Japan vol. 8" held at the Saga Prefectural Museum of Fine Art on 2-25 February 2007, the EU-Japan Fest Japan Committee co-sponsored an essay contest with the local newspaper Saga Shimbun.Visitors to the exhibition were to express how the work shown in it affected them, and the contest received 191 submissions from people aged 9 to 80 years old. These two essays were awarded the top honor in the contest.

It was a photography exhibit “where one can hear life’s heartbeat.” The sound of the wind, of the waves, birdcalls, cars, people’s voices…. Standing in front of one photograph after the next, a variety of sounds came to me. And in these peaceful moments I forgot the passage of time. Why did something about this feel familiar? In this moment I was reminded once again that, yes, I am Japanese.

No doubt there is a message hidden in their decision to photograph this commonplace scenery we see all the time. And so, while appreciating their photographs, I also enjoyed searching for these European photographers’ states of mind. How far did the photographer walk before she arrived in this place? Tired from walking, when she encountered this view I imagine she was both pleased to have found the treasure she was looking for, and filled with relief. Or, what about this place fascinated the photographer and compelled him to take a photograph?

It was as if I was traveling together with these photographers as they searched for Japan. And in their various photographs, I found what I interpreted to be “Japan.” “Playground equipment built in the middle of nature.” “Japanese trees peeking out from the back of a European garden.” The contrast and imbalance of these photographs was truly interesting. I felt that I had some understanding why they had pointed their lenses at these places. “Quiet view through a lace curtain” reminded me of the refinement and grace we Japanese women have come to forget. I found it funny that I was learning what it is like to be a Japanese woman from a European woman, and it made me happy to feel that the distance between us had lessened.

After rediscovering the beauty of Japan, of Saga, and of a human warmth not bound by country borders, my eye was next caught by unspeakably beautiful photographs of Greece. This area of the museum was labeled “Kuga Hideki Takes Greece.” While I know nothing of Greece and have never been there, in its blue sky and sea and in its walls painted white, I beheld vast and splendid scenery that lived up to my every expectation. Traveling in my mind to that faraway land, I was pulled in by one photograph after the next, and I experienced the strange illusion of a gentle breeze on my skin. Not wanting that pleasant feeling to end there, I bought a postcard of a photograph I had particularly liked, and in which I had most strongly felt the presence of that Grecian breeze. And then I left the Saga Art Museum. 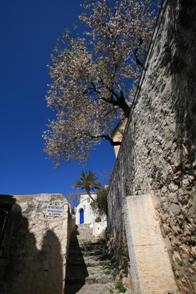 Reality awaited. I headed directly for my daily visit to the hospital where my mother is hospitalized. I parked where I always do, and opened the door to the same hospital room. On this day, too, my tiny mother lay in bed, her face turned to look at the sky out the window. Her condition continues unimproved and though of late our conversations have tended to be fragmented, my mother’s eyes lit up at the sight of the postcard I pulled casually from my bag and showed to her. My mother who can not eat on her own, let alone walk, said,

I wondered how long it had been since I had seen her like this. No matter how much I had encouraged her every day, I had not encountered a smile so full of hope. I was happy, truly happy. I could not help but feel the magical power of a single photograph. Before I knew it, I was eagerly telling my mother of the photography exhibit I had just seen. In a hospital room the atmosphere of which, if I’m not mistaken had become soft and warm, she firmly promised, “I’ll do my best in the rehabilitation work that starts tomorrow.”

“I hope you’ll get well soon, and though a sudden trip to Greece is out of the question, we can take a slow trip around Saga to see the beautiful nature with which this our home abounds. And someday, when another such photography exhibit is held, then let’s be sure to go together, Mother!”