On the occasion of finishing all programs of 14th EU-Japan Fest (Jan. 2006 - Mar. 2007), Secretary General Mr. Shuji Kogi wrote an essay about overall our activities.

The activities of the non-governmental organization EU-Japan Fest Japan Committee were launched in 1993 with the purpose of supporting participation in the Cultural Capital of Europe Antwerp 93 by Japanese artists. Fourteen years on, the various activities that grew out of interaction among the artists and local residents now occur throughout Europe and Japan.
In the same way that we till the land, plant our seed and then watch it grow into seedlings, saplings and then forest, in the same way do our activities continue to grow across many different regions.

“Can Art Save the World?” Antonis Answers

It was in the spring of 1992 that I first visited the Cultural Capital of Europe Antwerp 93 committee in Belgium as Secretary General. What made a great impression on me was a single poster on the wall of the office of organizing chairman Eric Antonis, who greeted me. The poster consisted of Picasso’s renowned “Guernica” and in large type asked, “Can Art Save the World?” At the time the civil war in Yugoslavia was heating up, and artists from throughout the European Union were coordinating support for the arts in Sarajevo. The poster was created for that campaign. I had only just met Antonis, but this is what he had to say to me about it: “Art cannot save the world. But there can be no true prosperity without art. This is precisely why I hope that the Cultural Capital of Europe activities will be an opportunity for each individual human being to ponder what it is to live through art.” Fifteen years later, the sight of him brimming with enthusiasm in the midst of tragedy has never left me. And it is no exaggeration to say that those very words have served as tremendous encouragement for our activities over these 15 years. Indeed, that poster on the wall of the secretariat continues to watch over us. 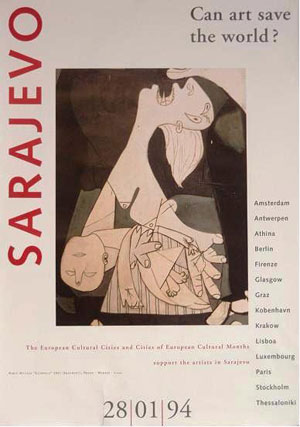 “Can Art save the World?”The poster received by Mr. Eric Antonis

“There is no such thing as patriotic learning or culture. Each belongs to the world, each constitutes past heritage that receives the stimulus of the present to grow towards the future.”
— Johann Wolfgang von Goethe, “On the Relation between Man and Culture”

As globalization presses onward, corporate activities are growing increasingly non-national rather than multinational, as seen in the spread of international investment and the growing importance of their overseas operations in host-country employment levels. Transnational activities in the fields of culture and the arts have also grown in vigor. Traditional culture is not only to be protected, but to be exposed to internal and external stimuli so that it evolves and gains further value. The progress it thereby makes is by no means confined within national borders, but will always spread beyond them. For its part, contemporary art has been innocent of national borders since the time it emerged. On the other hand, artists have each maintained their own identities and nationalities. The very term “international exchange” has now become an archaism. Search through the world as you may, the national and local governments of Japan may be the last ones that continue to use this term as though it has any significance. There is no longer any such as art that does not cross borders. There is no longer any point in merely crossing borders, it is substance that engages.

25 March 2007 marked the 50th anniversary of the Treaty of Rome, which laid the foundations for European integration. Following the conclusions of the First and Second World Wars, peace has returned. However, we confront the wretched fact that tremendous numbers of nuclear weapons are deployed throughout the world. This makes it impossible to imagine any other outcome to the outbreak of a Third World War than global annihilation. Even as globalization presses onward, politics remains an intensely national affair and there is no end to local conflicts. This drives me all the more to the conviction that business and art both have an ever greater role to play and bear increasing responsibility for peace and human welfare on a global scale.

Now, More Than Ever, Is the Time for Civic Social Responsibility

The issue of “disparity” (or divergence or socioeconomic inequality or, in Japanese, “kakusa mondai”) has recently gained currency in Japan. Now, the disparity at issue here is largely that of the gap between the rich and the poor. It is, in short, a criticism of the strain in a competitive society in which the rich get richer and the poor get poorer. I am left dissatisfied with this characterization of disparity. This is because I think of disparity as a question of more than just money. Surely disparities exist as well in values neither visible nor quantifiable — humanity, cultivation, happiness, ethics? Some of the poverty that I myself have witnessed in my 40 years traveling this planet is beyond imagination. As against that, there is in Japan next to no “absolute poverty” in which one lacks even something to eat. Rather, we have large numbers of the “relative poor” who fret that they are less well-off than other folk.
During the Heian period, some one thousand years ago, the priest Genshin had the following to say about the rich and the poor:

As the economy recovers and corporate profits rise, the public has turned a stern eye on how companies behave, and especially on the largest of them. As the public looks to companies to demonstrate corporate social responsibility (CSR), companies themselves are increasingly engaged in contributing to society across a range of activities. What we must not meanwhile forget, however, is our role as citizens in our societies and our attendant civic social responsibility, that other CSR. In speaking of the role and responsibilities of a company, one expression that enjoys frequent use is “as a corporate citizen”. Here, the company exists as no more than one component of its society, but I think it is our place as citizens, all the more so, to remember that we comprise society as a whole.

Not long ago a popular book appeared called “Hachidori no Hitoshizuku” (One Drop of Water from a Hummingbird) relating a legend among an indigenous people in South America. When the forest catches fire and all the animals scramble to escape, a lone hummingbird remains behind and proceeds to carry water, one drop at a time, to drop on the fire. “Now just what good will that do?” you may laugh, but the answer comes, “I am only doing what I am capable of.” That’s as far as the story goes, but a variety of writers added their own follow-ons. Here is how the environmental journalist Edahiro saw it play out:

In other words, even if there is very little that any one of us can do on our own, when we work together continuously towards some goal, it becomes possible to achieve something. This is a notion that I embraced. Society is growing increasingly complex. Taking a macro view of society, we are unable to understand what is happening at the micro level. It is precisely because we live in such times that the quality of citizen action comes in question. 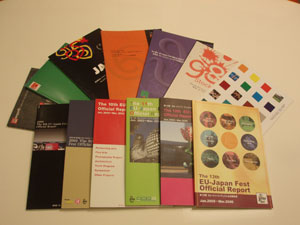 The Nazi officers who supervised the Holocaust were deeply attached to Bach and Beethoven, well-versed in philosophy and highly cultivated. As this shows, art has no role to play at all if it is nothing more than superficial to individual people. On the other hand, art is engaged with the way we live day to day, and it achieves a great deal when it succeeds in appealing to our souls.

It was last summer that the 88 members of an Irish children’s choir visited Japan and gave performances while living with local families. Reading through the many questionnaires returned after the concerts, to which audiences came in droves, I blurted out an exclamation of wonder. It was over just three lines from a man in his fifties working in agriculture:

“Last night the typhoon finally died out and this morning I went out in the fields early to work. Then in the evening I came to the community center and heard the beautiful voices of the children from Ireland. It was a truly splendid day.”

Whereas most respondents described their response to the concert, this man looked back over his entire day and, using the word “splendid,” communicated the pleasure he took in life. When we consider true affluence, we notice that to specific individuals art has priceless value, neither visible nor quantifiable.

These past 14 years I have enjoyed the opportunity to meet and work with a great many citizens’ groups and artists that took up their social responsibility. Individually, they may be of little significance, but they are treading steadily towards the future. My intention is to continue to move forward with them. And that with a clear picture in my mind of tilling the wilderness and waiting patiently for the thick, green forest to emerge all across the land. 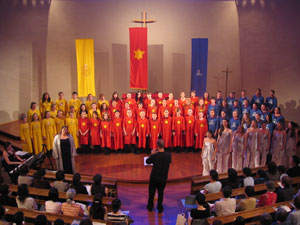