HOME > Column > From Friendship to the Heart of Culture and Excitement

[Vol.12] From Friendship to the Heart of Culture and Excitement

The 2nd International Music Festival for Youth was held at 4 venues in Kagoshima Prefecture in July 2005. Mrs. Inoue, director of Wakayama Arts and Culture Support Society (wacss), visited Mishima-mura and Matsuyama-cho. A report from her as a Wakayama's point of view.

When djembe master Mamady Keita came to Japan from the distant African country of Guinea in 1994, he expressed a wish to visit a small village about the size of his own hometown of Balandougou and this is how he found his way to Mishima-mura in Kagoshima prefecture.


Mishima-mura is a village made up of the three islands Takeshima, Iojima and Kuroshima located some 40 kilometers south-southwest of Nagasaki-bana at the southern tip of the Satsuma peninsula. The children of the four primary and middle schools on these islands leave when they enter high school. The significance of djembe, the traditional percussion instrument of the Malinke people of West Africa, to Mamady as the irreplaceable link with his own hometown and his wish for the children to retain their own hometown ties when they leave for high school led to his instruction of the island children in djembe and also denote the beginning of the story of his friendships there.

As a child Mamady joined Guinea’s national children’s musical ensemble, but fled to Europe when the country was engulfed in civil war. On returning to his hometown, he found that over time it had undergone great religious and political changes and that none of the children there played djembe. The children who learned djembe left that year on a two-week performance tour with Mamady and the members of his band Sewakan. Stepping onto a large stage for their first times, the children shared the excitement with Mamady through their performance. Mamady would subsequently return to Mishima-mura every year.

In 1998 four children of Mishima-mura visited Mamady’s own hometown. The welcome given them by the village made an impression on them many times stronger than the excitement of mounting a stage. Lacking ability in the language, the children instead used djembe to converse. And so the children of Mishima-mura taught the children of Balandougou their rhythms. When it came time to leave the village, they embraced each other as though friends of many years. This was for Mamady an opportunity to restore the sounds of djembe and its way of life to Balandougou once more and to speak to the people of the village of the importance of teaching children their traditions.
I was deeply impressed to watch Mamady as he spoke to the people of the village gathered beneath a tree about Mishima-mura.
Onboard a violently rocking ship we watched the videotape “The Story of Mamady and Mishimura-mura”. 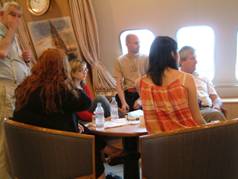 Performers view a video aboard

The 2nd International Music Festival for Youth was held at four locations in Kagoshima prefecture July 6-9, 2005. One of the locations chosen was Mishima-mura, six hours by ship from Kagoshima and tossed by waves four meters in height. One noticed five of the twenty-odd passengers onboard. The musicians from Ireland seemed distressed by this hearty welcome from rough seas. “Normally the voyage would be cancelled, but we need somehow to get to Kuroshima for the day of the concert.” And so, our vessel loaded up with enthusiasm for the concert, we headed for Takeshima, Iojima and then overnight to Kuroshima. At each island we took on children who would play djembe at the evening’s concert. To greet us, each port we stopped at flew a flag proclaiming “Welcome”. As the ferry linking the three islands would not be making the return trip, the children would enjoy a long-awaited opportunity to catch up with each other. That evening we would all sleep on the ship. “There are 60 children in these islands, in primary and middle school together. Of these, 26 have what we call a salt-air education. These are Mishima kids who came from the cities to live among the people of the islands.” 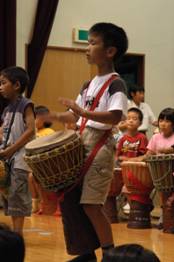 On 6 July 2005, the KatadomariFureaiCenter on Kuroshima throbbed with the pulse of djembe at the opening of the music festival. The djembe of all 60 of the islands’ primary and middle school children spoke of their feelings for their hometown and the beat resounded forthrightly with their love for the islands. We were stirred by the surprised smiles plainly apparent at the heart of the excitement.

The story began when djembe master Mamady first visited the islands and continues to join all their people together. This was brought home by the sight of the children’s enthusiasm for the whole of the superb performance by the Irish musicians and their engagement head-on with its excitement.

The previous evening’s emotions locked in their breasts, the children were seen off to Kagoshima with paper streamers.

We made straight for Matsuyama-cho. Our reception at Matsuyama-cho by a full complement bearing coats of arms was both a surprise and made plain to us the enthusiasm invested in the festival. Here were the Cantate Domino children’s choir from Belgium with voices like angels, and here also the Crawford Piano Trio and Friends from Ireland. Matsuyama-cho had arranged homestays to receive the children of Cantate Domino. Though this was their first such venture, the response to it was quickly suffused throughout the atmosphere in the church where they performed.

The music festival of 7 July 2005 and the sure splendor and freedom emanating from art coincided with the bliss of the annual Vega Festival in the heavens. Persons involved with the festival put us up that evening and we heard from them about their histories and their great enthusiasm. We spoke to each other extensively of the impressions made on us. A handcrafted, heart-wrought music festival. The response of the entire town was evident and enviable. And it was an encounter of great significance in which we found much was to be had in common. In the scenes of their host families sending them off the next morning with tears in their eyes, one felt sure new stories were beginning. 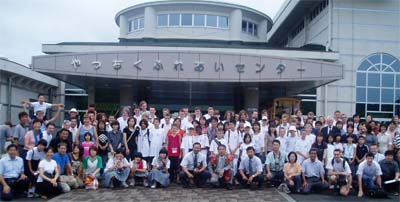 Although covering just the two days of July 6-7, this was truly a good experience. If we would show ourselves capable of taking it to the next stage, our return flight would be marked by enthusiasm for the pursuit of what is possible and the rejection of any muttering about governments and ethnic differences and whatnot. This is what I pledged myself with new strength.